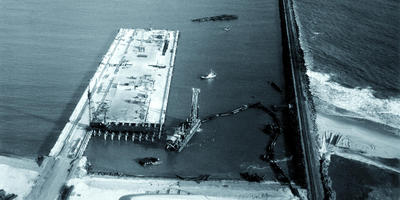 History
Inros Lackner part of the past and the present

The story in Togo begins in the early 60s with the design study of the first construction phase of the Port. Since the inauguration of the Port in 1968, Inros Lackner has accompanied the development of the Port through all extension phases. Today, Inros Lackner has a unique place in history in the development of the Port. 50 years later after its first inauguration, this important maritime infrastructure has become the route to the sea for all Sahel Countries of West Africa. It is the only Deepwater port in the sub-region with a depth of approximately 17 meters.

The Port of Lomé is the motor, driving economic development in the West African Region. Not only does it remain the main route for the West African Countries trade to the World, but it also contributes to the economic development of landlocked countries such as Burkina Faso, Niger and Mali. In its continued quest for optimum quality of service, the Port of Lomé has recently completed its expansion on modernization of its Infrastructure. As an Engineering Bureau specialised in Maritime Engineering, Inros Lackner is proud to part of this unique history of Togo.

Recent Projects with the Port: